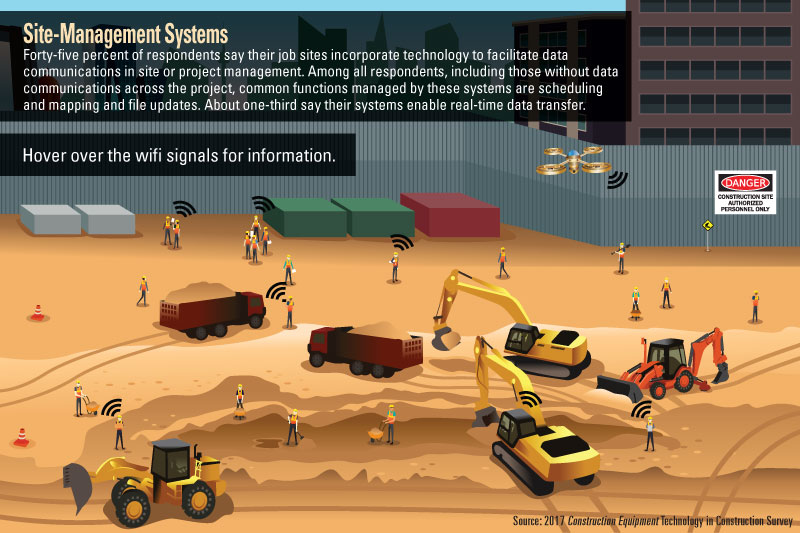 The switch was flipped sometime in 2015, and during 2016 the topic dominated construction conversation: How would technology change our business? For those in the equipment-management profession, technology has been nibbling the edges of consciousness for more than a decade: first, as machine control redefined earthmoving, then as machine data threatened to flood managers’ capabilities for analyzing costs.

As the editors of Construction Equipment have reported these technological advances, two things became obvious. First, machine data will play an important—if not the key—role in an organization’s efforts to communicate digitally across job sites and to manage those sites in an efficient and profitable manner. It will also allow them to more competitively bid the next project. The second observation was this: No one knew how deeply digital technology has penetrated our industry.

Hence the decision, upon which this report is based, to survey those in construction on the use of digital technology in their organizations and businesses. CE’s parent company is uniquely positioned to benchmark the state of technology in construction. As a fleet-management publication, CE has its finger on the pulse of machine data. By partnering with several sibling magazines, we also have access to management within specific construction vocations, including nonresidential, transportation, and water infrastructure.

Late in 2016, we invited subscribers to CE, Roads & Bridges, Water & Wastes Digest, and Building Design+Construction to participate in an online survey. A total of 257 opened the emails and 146 answered all or parts of the survey, with 101 completing the questionnaire in full. As we tracked results, it became clear that respondents were well-versed in the topic. Overall results changed negligibly as the number of respondents grew.

Since machine data and the ability to transmit, analyze, and use it for the benefit of the organization will be key to the success of technology in construction, we determined to understand fully this aspect of the business.

To be clear, we are not focusing on technology applications such as email, cellular telephones, or GPS locators. Machine data is defined as information specific to a machine that can be gathered digitally, such as hours, idle time, and fuel consumption. These data have been accessible for years, but it was only when the Association of Equipment Management Professionals (AEMP) noticed a frustration among its members who wanted to use this data that the term “telematics” came to the fore. Telematics, simply, is the transmission of computer data through telecommunications, or in the fleet arena, transferring machine data into a management format that allows it to be used.

Last year, major telecommunications carriers announced that they would be moving from 2G (or second-generation) data lines to 4G. According to our survey, 55 percent of respondents say their organization is now using the 4G bandwidth in their organizations. One-third are using 3G, and 12 percent are still using 2G. 2G networks will soon be shut down by the telecoms, so movement to a higher-generation system is the first thing organizations must do if they are serious about site communications.

Organizations have been slow to implement telematics, although progress is being made. Even though machines have been able to collect data for some time, the percentage of fleets with the capability remains low. Two-thirds of respondents say that less than 10 percent of their fleet has telematics capabilities. Only 16 percent report that more than half of their fleet’s machines have the capability to collect and transmit machine data telemetrically.

This number would include those who have installed third-party data collectors on older machine that are not delivered with an OEM’s proprietary data-collection system. But having the data available does not mean an organization—or even an equipment department—is using it to manage the business. Telematics data are useless if not used.

Equipment departments use machine data in many management functions, although the number of those using it drops as the sophistication of the function increases. Tracking machine location and scheduling maintenance, for instance, are used by 77 percent of respondents, but only 10 percent use data to manage machine life cycles.

In terms of job-site management, 29 percent use machine data to track production, and 42 percent track utilization.

On the organizational side of machine data, 34 percent of respondents said fleet data are used elsewhere in the business. The simplest application, logistics and scheduling, takes advantage of telematics data within 59 percent of respondents’ organizations. Nearly half use it to monitor operator or driver behavior, and 34 percent incorporate equipment data into their estimating and job costing function.

Arne Ruud, corporate equipment manager for Atkinson Construction, represents those who have made the transition from shop to organizational use of machine data.

“We do use [machine] data in other departments,” Ruud says. “We bill [equipment] out by the hour to the jobs. So our costing guys and accounting folks are getting a lot of help. Before, it was a time-card system.”

Atkinson is also able to incorporate telematics from various data sources, whether a manufacturer’s proprietary system or its third-party provider. Ruud says a recent joint-venture project served as a pilot of sorts, whereby Atkinson used the United Rentals Total Control fleet-management service and the AEMP telematics standard, or ISO15143-3, to manage the overall fleet on the project.

“For this job, the price of admission was you had to have telematics on your machines if you were going to use them,” Ruud says. “We had Telogis, [Caterpillar] VisionLink, and [John Deere] JDLink. Even United Rentals put telematics on all of their rental equipment [with Total Control]. This was kind of a pilot project for them, too.

“We were stretched out over a 14-mile stretch of highway, both north and south and east and west from an intersection, so we had stuff all over. It really turned out nice for us. That visibility on what’s being used, where it’s being used, and how much it’s being used is a pretty good disinfectant.”

Ruud says on smaller jobs, the telematics data allow him to monitor fleets that may not have an on-site equipment manager. “When I can look up—and it’s close to real time—and see where machines are and how many hours are being used today, that’s pretty helpful.

“We’ve always had the standby machine and were amazed that the spare machine burned as much fuel as the one assigned to the job. This helps eliminate the equipment hoarding. It breaks the tie,” he says.

Digital transmission of data is the backbone for the technological advances in job site management. Caterpillar, Komatsu, Topcon, and Trimble spent much of 2016 introducing their own versions of this technology. Forty-five percent of respondents, as of late in the year, had implemented technology to facilitate data communications in site and project management.

Digital connection of the project requires an overarching strategy for technology. Fleet departments, while on the vanguard in machine data, have found it difficult to drive organizational development of technology solutions. They know that machine data will be a primary piece of that new puzzle, but the organization’s leadership must determine the benefits that result in change.

We also asked respondents about implementation of various types of other technology that has entered into the conversation recently. Those results are presented in charts nearby.